About my work I

If somebody asks me about a pair of keywords (tags) that define my work, probably I will say Ocean Observation and Climate.

What does it mean? Well... first, that I work with oceanographic data, i.e. data that have been measured in the ocean, and that my research is based on the analysis of these data. Nowadays, the work with ocean models is quite common, something similar to the models employed for weather forecasting, but this is not my case.

What I measure and with which aim explains why climate is also an important keyword. As you know, the ocean plays a fundamental role in the regulation of the Earth's climate. Why? Due to (1) oceans cover over 70% of the Earth surface (http://fromtheblueside.blogspot.com/2012/01/come-to-blue-side.html) and (2) the seawater heat capacity is 1000 times the air heat capacity (it means that it is 1000 times more difficult to vary the sea water temperature than the air temperature), the ocean is the big reservoir of the solar heat that the Earth recieves. Besides, solar radiation is maximum in equatorial zones and minimum in the poles. It makes necessary movements in the ocean and the atmosphere to redistribute this heat. In absence of these movements, the equatorial regions would become warmer, and warmer and the poles colder, and colder. 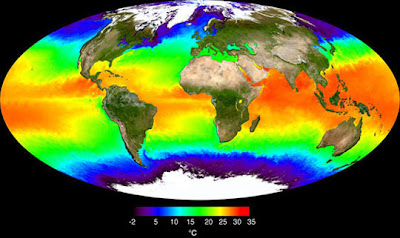 Sea surface temperature of the ocean. We can see how the warmer water (warmer than the water at the same latitude) is transported from the coast of Florida towards the North of Europe by the Gulf Stream and later by the North Atlantic Current (Source: Visible Earth. A catalog of NASA images. http://visibleearth.nasa.gov/)

In my PhD, I studied how the energy is exchanged between the atmosphere and the ocean and the effects of this interaction in what is kown as the mixed layer, the upper layer of the ocean that has 'direct' contact with the atmosphere (and so it is well mixed). Don't be mislead: the upper layer can refer to the first 500 meters of the water column when we talk about the mixed layer. The effects of this interaction are not only important because of what I have already mentioned, but because it controls the mixing in the upper layers, and so the retention of the phytoplankton in a layer with enough nutrients and light for the photosyntesis. 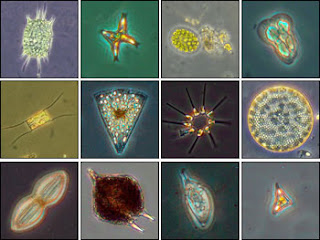 Some phytoplankton species. The phytoplankton is equivalent to the plants on dry land, but because they don't have roots they depend much more from the medium conditions to take the light and nutrients that they need for the photosyntesis.

And...until here (until the effects in the phytoplankton) my study about the 'Effects of ocean-atmosphere interaction in the Bay of Biscay' covered. Later, 'I have moved' to the North Pole in my study area. I will tell you about it a next post or ... you can read about it now in Spanish (http://fromtheblueside.blogspot.com/2012/02/sobre-mi-trabajo-ii.html)

I hope you can understand something. If not...please let me know

Muchas gracias por tu comentario.
Many thanks for your comment.

Entrada más reciente Entrada antigua Página principal
Suscribirse a: Enviar comentarios (Atom)
He hecho un montón de cosas, pero básicamente soy oceanógrafa ... y me encanta! Uso este blog para compartirlo con vosotros e invitaros a 'pasar al lado azul'. Espero que os guste.
I have done a lot of things, but basically I'm an ocenographer ...and I love it! I use this blog to share this passion with you and invite you to come to the blue side. I hope you like it.